Hilton Schilder accompanying his daughter, Duende at the recent launch of his latest CD, Alter Native.

The festive period will soon be upon us and it’ll be the season for giving. So why not show your heart is in the right place and give someone something deep and meaningful.

Like the latest CD from a few of our local artists. Just off the top of my head there are three available right now: Alter Native by multi-instrumentalist Hilton Schilder, Evolution of an Undefined by young bassist Benjamin Jephta and Hits of Yesterday by one-time Hippies lead guitarist Gammie Lakay.

It’s tough being a local performer. It always has been. They don’t earn big bucks doing live gigs and, from a recording perspective, they don’t get as much exposure on local radio.

Throw in the Internet downloads, piracy and file-sharing and one can see what a mountain it is to climb to make a decent living as an entertainer.

This is why I am quite happy to publicise these three, two of whom – Schilder and Jeptha – I was fortunate enough to see perform live recently.

Hilton launched Alter Native a few weeks ago and the work is in keeping with his musical development to embrace his roots.

Alter Native is Hilton’s 40th that he can pin down, (“there may be others where I was a session musician for other artists”).

Hilton, son of legendary jazz pianist Tony Schilder, says this project was, in a manner of speaking, dedicated to his family.

“The album is dedicated to my grandson, Aiden, but there are individual tracks which I have named after other members of my family (Tesna and Marko’s Polo),” he said.

His daughter, Duenda, sings on the track Use Your Mind, while Mishka Reddy sings on Are You Prepared.

“The tone of the album is definitely roots music,” Hilton says. “There isn’t that steroid style of piano playing. I’m into landscapes. It’s more from the heart.

“As I’m getting older I find I’m more and more into the spirituality of music.”

A good example of his direction these days is in the essence of the title track.

“It is such a beautiful work. I used five musical bows and then added the percussion and stuff. I enjoyed making that, in the way it grew.”

His next project is a solo piano and solo guitar album. (“I was around some of the best guitar players around . . . Russell Herman, Mac Mackenzie and Philly Schilder.”)

Benjamin Jephta’s The Evolution of An Undefined follows on from his Homecoming album, which was all about discovering his inner self. 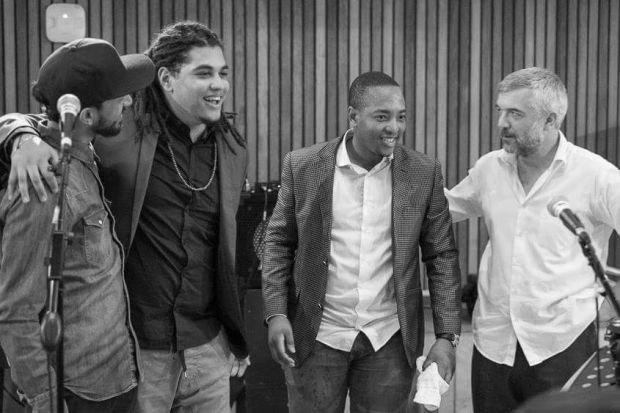 This latest effort, as the title indicates, focuses on what he says “who I will be . . . modifying, reconstructing, progressing”.

It goes without saying that it is deeply personal stuff and understanding it would require having an insight into the mindset of the person creating it.

I gave it a listen and found an amalgam of intricate rhythms and arrangements. Benjamin was recently named the 2017 Standard Bank Young Jazz Artist. But this album goes a bit beyond the jazz genre. There’s a bit of fusion, some electronic and hip hop.

It is the song for Ellen Pakkies that really resonated with me. Despite having a pretty catholic taste in music, I am not big fan of hip hop, particularly when it is peppered with a liberal spicing of “motherfuckers”, “hos” and “bitches”. Must be an age thing.

Ellen Pakkies is the Lavender Hill woman who killed her tik-addicted son in an act of tough love. Hip hop artist Jitsvinger, in the patois of the townships, addresses the social issues that surround the tik epidemic on the Cape Flats. I just wish my ear was more attuned to his rapid delivery. It would help to understand it better.

Benjamin also plays organ, keyboards and synthesizer on the album which he also produced.

Like Hilton Schilder’s album, Benjamin’s is cerebral stuff. You’re probably not going to find it on the playlist at your local jazz-funk club. It’s classy material and indicative of the growing maturity of our musicians in developing their own styles.

Our radio stations should sit up and take note!

Gammie Lakay’s new CD, Hits of Yesterday, includes songs like Last Date, When Somebody Loves You, You’ll Never Find, Affirmation and Storybook Children. You have to be of a particular vintage to be able to relate to those songs. It’s all late-Sixties early-Seventies stuff that is like a fix for the nostalgia junkies.

Storybook Children deserves special mention. It was covered in Cape Town back in the day by Harold and the Hippies. That is the first group Gammie played with and they had quite a following on the Cape Flats. The song was a big hit (when vinyl seven singles sold by the thousands).

Gammie has revived it and found Rashaad Adams to do the vocals. He was the original Harold from Harold and the Hippies.

“He just happened to wander into my home studio while I was busy with the project and we took it from there,” Gammie said. He has re-arranged most of the songs on the album.

With the way distribution goes these days, I suggest you contact each via Facebook to find out more.

Blogger’s note: I became aware of the latest initiative, AzanziMusic.com (which offers consumers a secure platform to buy the recordings of local artists) shortly before this was to be published. It’s early days but let’s keep our fingers crossed that it can deliver on what it promises.  Check it out at azanzimusic.com