Hilton Gelderbloem . . . The singer, not the song. Or maybe the right word to suit the occasion should be songwriter.

Way back in the day, when Methusalah was a boy and clapping hands at trains, Hilton Gelderbloem was setting out on his journey to make a name for himself on the local entertainment scene.

It was actually sometime in the early ’80s – a lifetime ago for the Next Gen and  Millennials types – but a few Baby Boomers might still remember a young Hilton jagging a few gigs on the local circuit. He did well enough to score a write up in the local newspaper.

But, for whatever reason, he never really made it as a significant drawcard on anyone’s bill.  Maybe it was because, whilst he earned a crust as a singer and stage entertainer, that wasn’t really what his life’s ambition was.

Hilton has always wanted to be a songwriter for as long as he can remember and now, after years of penning lyrics, he is finally getting to the stage where he always envisaged his career would end up – writing songs for himself and other singers.

Last month, two songs he wrote were recorded by Leslie Kleinsmith and Vernon Castle, and both have been loaded on various platforms such as Spotify, YouTube, Deezer, AppleMusic and Boomplay for downloading and streaming.

Leslie has recorded two catchy ballads called Jelina and Thinking About You. Vernon laid down a rather jazzy Ready For Love. I reckon these three songs would make pretty nice digital gifts in the Christmas stocking. 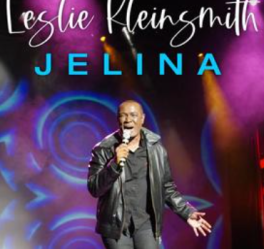 These initiatives may be Hilton’s first big push into commercialising his dream. It certainly isn’t going to be his last.  There are plenty more where they came from.

“My interest in song writing actually started when I was still at high school at Good Hope College,” he says. “A friend showed me three chords . . . E, B7, and A on a guitar.

“So, for a long while that was all I could play. I would then imagine melodies around these chords. It got to the point where, when asked by a teacher what I planned to do with my life, I said, in front of a stunned class, ‘I want to be a songwriter and move to London to write for the pop groups there’! That was back in the early ’70s.” 😁

While Hilton’s performing career “plodded” along in the ’80s and ’90s, he was always nurturing the ambition to be a songwriter.

“I started writing a project called Soul Searching in about 2002, when I was playing with a Canadian pianist at Up On The Tenth at the Intercontinental Hotel in Dubai,” he says. “Lyrics and a hook phrase tend to come first for me, then I would try to write the music with it. Not always though.

“After Dubai, I ended up on the islands of Mallorca and Menorca. Lots of free time and new surroundings triggered some ‘soul searching’. It was on a subsequent three-month stint on a cruise liner between Kiel and Oslo, and a four-month stay in Tenerife, that I wrote most of that project.

“When I got back home I added the music. Before I recorded those songs, I recorded two other songs, I’ll Be Waiting For You and Our Love Story at Paul Petersen and Patrick van Blerk’s Cape Town Sound Studios.

“On the first track, I was lucky to have my very good friend, the late Zayn Adams do back-up vocals with Paul. The second song, was subsequently covered by another good friend, Richard Ceasar. I’m aiming to include those two in my new project, A Songwriter’s Dream.”

Although Hilton has pencilled in certain artists for some of the songs he has penned, that wasn’t what he intended.

“I did not write those songs with other singers in mind. I wanted to record them myself – which I did. I passed my keyboard demos on to Mark Goliath, after securing sponsorship. Mark Goliath is a sought after producer and performer. He has produced for Jimmy Dludlu, Judith Sepuma and recently for Gavin Minter. Mark really deserves full credit for breathing life into those songs. He roped in Allou April on guitar and Lee-Anne Fortuin to arrange the backing vocals, while he did the rest of the programming. Brilliant job!

“I was not happy with the final mix and my performance though, so it laid dormant for a few years until I decided to ask Leslie, Vernon, Glenn Robertson, Richard Ceasar and Danny Butler to do them.   Zayn, of course, would have been part of this project as well.

“When I started out in the early 1980s, these guys were already doing their thing. They are far more accomplished singers, so why not. I’m not sorry. It was my dream to be a songwriter before I started performing as a singer. I am still performing as a one-man band in and around town.

“As far as writing for them in the future, I will continue to offer them my work. If they like it, then great.”

In the early ’80s, the old SABC music department had a transcription service. I was lucky to be recruited to do four albums with Merton Barrow, Werner Krupski, Mike Campbell and Darryl Andrews as musical directors. They would arrange an album of songs for the various radio stations back in the day. I also had the opportunity to record some of my own songs as well.”

While he admits he doesn’t really write songs for other singers, he concedes the songs Leslie and Vernon did, certainly sound as if it were written for them. “I listen to their voices and identify their ‘sweet spot’ notes. That will be used going forward.”

Hilton doesn’t boast a hi-tech home studio “although I wish I had”.

“I have a Roland EXR3 keyboard that has an arranger program. I sometimes record the basic idea with guitar, on my phone. I am trying to establish a collaborating partnership with Frank Cuddumbey. We’ll see how that goes. Once I am happy with the demo, I will look for sponsorship and find the suitable singer. I have mentioned to Leslie that I’d like to write a swing/bossa/jazz album for him. So, let’s see.”

Hilton has signed his pet project over to Cape Town Sound which has a publishing division to deal with “getting the music out there”.

I have signed this project over to them to publish, as I complete each singer’s two songs. All the major platforms will have them available for downloads and streaming. We are also arranging top have local radio stations and DJs place them on their play list them, once it’s been registered with SAMRO and SAMPRA.

“I am always writing. So, if I’m approached for a song, I can always tailor what I have. I have lots of complete and half-complete songs in ‘roughie’ form hanging around. Tony Drake who has Light Way studio in Observatory is recording this project, vocal plus a light new mix. I like the way he works and hope that I can form a working relationship going forward. I will also record some of them in future myself if the funds are available. As you know, that’s always the problem.

This blog has featured various stage performers and even the odd deejay. But our entertainment embraces multiple streams of talented who make up the industry. We should acknowledge them. 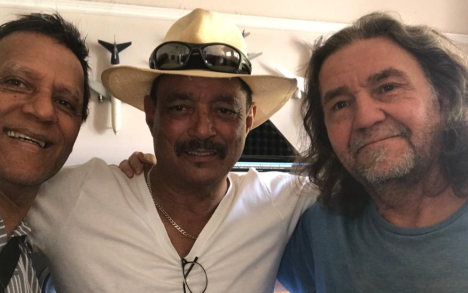 Vernon Castle, centre, with songwriter Hilton Gelderbloem (who wrote a song for Vernon), and Tony Drake of Lightway Studios.

Click on the link for a short taste of Leslie and Vernon’s – and then download or stream it.  Local is always lekker.