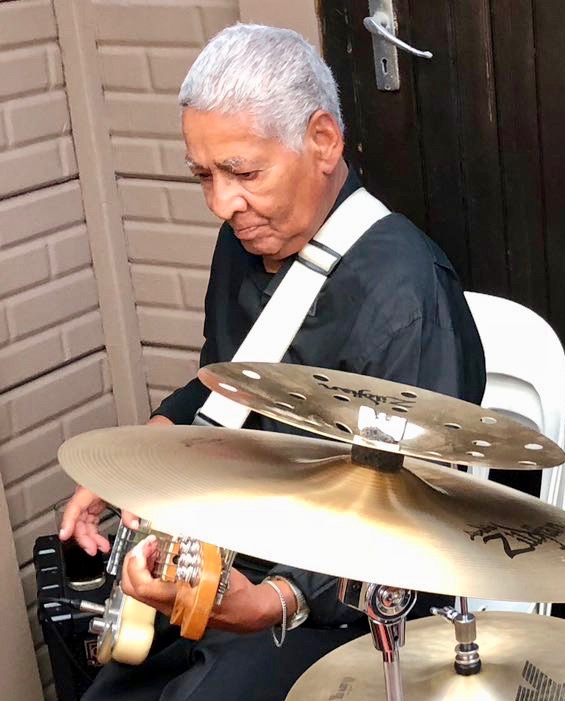 Bassist Gary Kriel seems like he has been around forever on our music scene. Well, he has. He has been entertaining us for the best part of 70 years.

That would make him pretty old, right? Not really. He is a youngish 80 years old today. Please wish him a happy birthday.

Not a bad effort Mr Kriel and still to be plucking those strings at gigs in these times, makes it pretty exceptional.

Gary is part of a remarkable group of Cape Town musicians who started their careers way back in the ’50s and have endured to this day . . . pianist Abdullah Ibrahim (Dollar Brand), guitarist Harry Peacock, and singer Zelda Benjamin among them.

Interestingly, all of them play and sing in various styles, yet they are best known as jazz performers. Must be something about jazz that lends itself to longevity.

For Gary Kriel, that longevity started way back in the early ’50s when he played his first gig as an 11-year-old in his cousin’s langarm group. Not on guitar, not on bass. Playing accordion.

He says music came naturally to him even as a child in his home in Bo Kaap where he was born.

“My grandmother told me I used to strum the guitar lying on the bed as a baby,” he says.

As a child, Gary had a physical impairment with his legs that required lengthy stays in the Maitland Cottage Home for Cripple Children in Garden Village.

It was while he was at Maitland Cottage that his interest in music really took hold.

“There was a piano in the place that we all used to tinkle and that’s where I picked up my initial playing skills,” he recalls.

It was also while he was there that he received his first guitar – from the mayor of Cape Town.

By the time he was in his teens, Gary was already familiar with the piano, the guitar and the accordion. His “education” in music was helped along the way by regular visits to the Home by established musicians like saxophonist Jimmy Adams and guitarist Kenny Jephtha. In Gary’s words, “we would have something of a jam session when they were around”.

It started Gary on a road where he became something of a multi-instrumentalist – but mainly strings: guitar, bass, banjo, ukulele.

In the early days, around the mid ’50s-early ’60s, after playing langarm gigs – he even played langarm with the legendary Stan Lombard’s group – he joined a group called the Rock River Boys.

“Willie van Blomestein was the guitarist in the band but, to accommodate me, they moved him on to the drums. We played rock ’ roll, you know, Elvis stuff.” [Willie died in April last year, a few months short of his 90th birthday.]

The late Willie van Blomestein who was bumped off the guitar and onto the drums to make way for the new kid on the block, Gary Kriel, back in the Fifties.

How does he feel about the langarm stuff? “Oh, I still enjoy playing it. Somebody came to see me recently to put a langarm group together for a gig but you don’t really get capable musicians any more, man.   First thing they ask is about the money and then you still have the drinking issue.”

Word got around in those early days that the kid on the guitar was “something else” and the next thing Gary knew, he was taking over the guitar duties from another musician who went on to become one of our greats, Kenny Jephtha.

The gig was in the “white” club, The Catacombs, in the city and he joined Cecil May on keyboards, Willie van Bloemestein on drums and Johnny du Toit on bass. [Many of the Cape Flats’ top musicians played in the white clubs because they were professionals and that is where the money was.]

His time in The Catacombs came to an end when Dave Bestman recruited him for the travelling Gold Dollar Show and the Golden City Dixies.

“I was thrown in virtually at the deep end but I learnt a lot backing all these wonderful artists, “ Gary says. “I will never forget the late Ronnie Madonsella. What a singer!

“Vivian Kensley was also my favourite artist. She was originally from Cape Town but moved to Durban. She did Shirley Bassey stuff better than Bassey. That was a good learning experience for me.”

Around 1961, Gary moved to Durban where he joined a group led by multi-instrumentalist Roy Petersen (father of drummer Bjorn Petersen).

“Jackie Schilder was on drums and a guy from Jo’burg on bass. One night the bass player didn’t turn up and I ended up switching to bass. We became the Roy Petersen Trio.”

Gary was recruited for the Percy Sledge backing band in 1968 while he was still playing up north. “I was his lead guitarist when he was performing in Swaziland and I did a film shoot for a documentary with him. I don’t think then film was ever released.”

Gary played up north for almost 15 years before coming back to Cape Town where he found regularly gigs around town with various groups, but mostly with Tony Schilder’s Trio.

Mr Versatile Roy Petersen . . . Gary Kriel joined his group in Durban on a short-term basis and ended up playing with him for more than a decade.

“In my long career, I have only had two groups that I stayed with for quite some time – Roy Petersen and Tony Schilder.

“It was quite funny how Tony and I got together. I was playing with a group at a venue in Rondebosch and suddenly the others decided they had another group to go to. I bumped into Tony who told me he was freelancing. So I suggested he join me at the venue but insisted that he called the group The Tony Schilder Trio because he was better known than me.”

Gary has so many interesting experiences that cover his decades in the game, it could fill a book or two. Quite a few bear recounting here, most notably his near-death experience on the Oceanis, the passenger liner that sunk off the east coast of South Africa in 1991.

Let Gary tell the story: “Tony, Hilton Schilder, Tina Schouw, Mara Louw and Alvon Collison and I were part of the ship’s entertainment. We were quite popular on the boat.

“Soon after the boat left East London for Durban and then finally Fremantle in Australia, things stated to go wrong. The furniture started moving. The piano was sliding all over the show.

“Next thing, abandon ship! We couldn’t even get to our cabins below because it was already filled with water. Everybody was ordered into the life rafts.

“I dived into the sea and scrambled into a life raft. I wasn’t scared of that. Getting up onto the container ship that rescued us, up the long ladder over the side, was the scary part. There were strong winds and the ladies were panicking. I stuck my head under Mara’s bum and pushed her up.

“Poor Tina was seasick most of the time but she was tremendous in helping to get the passengers in to boats. My beloved Fender bass went down with the boat.”

Another treasured moment for Gary is the time when jazz piano maestro Chick Corea walked into The Surwell in Surrey Estate where The Schilder Trio was playing.

“He came with some of his guys and they wanted to do a guest spot. Tony moved off the piano for him and I was ready to hand over my bass but he stopped me and said, ‘No, I wanna play with you’. It was a nice gesture. He played real way out stuff.”

Gary has backed a number of international stars in his 15 years with Roy Petersen and drummer Brian Abrahams on the Sun International Hotels circuit around Southern African and one of his favourites was jazz diva Sarah Vaughan.

He also had a stint playing Dixieland in the United States with the Riverboat Band made up of ex- South African Navy Band guys.

Although Gary invariably ends up doing jazz gigs these days – he plays occasionally with guitarist Harry Peacock and pianist Gary Hendricks – he insists he has no preference.

“I like a lot of Brazilian music. I have been there twice but I can appreciate all styles and I enjoy playing all stuff.

“I used to play ghoema in the coons and the nag troep. I played for the Jong Sentrale and all the comic songs had ghoema rhythms. I switched to banjo because the ghoema took the place of the bass guitar. You couldn’t hear the bass when the ghoema rhythm was going.”

His stellar career hasn’t brought him immense wealth but he admits he is better off than some other musicians. “Making a living playing music in South Africa was very tough. I’ll give you an example: one guy said he couldn’t pay me for the gig, but offered me a bag of crayfish. I did enjoy it, I must admit.”

When Gary finally unplugs his bass, he might have a lot to reflect on on life as a professional musician.

Tough it may have been, but consider the alternative if he stayed with his day job: “My father got me a job cleaning telephone booths (for the Millenials, those where the little structures dotted around the suburbs; you dropped your tickey in the slot and you got three minutes talk time once you were connected). [Google what a tickey is.]

Gary has played on more recordings as a session man than he cares to remember. He was the bassist on the recording of one of Cape Town’s most popular songs, Tony Schilder’s At Montreal. Gary himself has no recordings in his own name.

He also admits that he has never had any desire to sing although he has hummed in the background.

This gifted musician, who never made it past Std 6 (Year 8), and has a wicked turn in self-deprecating humour, is truly one of our legends.

Last word to Gary: “A Dutch musician once called me a freak when he listened to me playing. I hope he was talking about my music and I hope he meant that in a nice way.”

The octogenarian entertainers . . . Harry Peacock on guitar, singer Zelda Benjamin and plucking the bass at the back, birthday boy Gary Kriel.

Harry Peacock: The jazz maestro who owes it all to the coons

All material on this blog is copyrighted. Permission should be obtained before re-publishing any part of it.