Taliep Petersen . . . first biography of entertainment giant completed and to be published in a few months .

Today, April 15, is Taliep Petersen’s birthday. The singer-songwriter-playwright, probably best known for his involvement with District 6 – The Musical, would have turned 72 today had his life not been cut short in a brutal manner on that fateful Saturday in December 2006.

Yet, even in his short 56 years on this planet, he has left a big enough legacy to be remembered as one of the giants of our entertainment industry to grace our stages.

Taliep was honoured in his lifetime and has received numerous posthumous accolades, but no one has come close to doing a comprehensive work on the life and achievements of the Salt River/District 6-born entertainer.

Taliep Petersen performing at the Lux in 1968.

No one – until now. Researcher-writer Dr Paula Fourie has just completed a seminal work titled Mr Entertainment: The Story of Taliep Petersen. It proved to be a labour of love that has taken the best part of 10 years. The book will be published later this year.

Paula is a research fellow with the Africa Open Institute for Music, Research and Innovation attached to the Faculty of Arts and Social Sciences at Stellenbosch University.

Paula said this week her interest in Taliep’s career and achievements had its genesis back in 2011 when she had to make a decision about what her dissertation would focus on for her PhD studies. Prior to her PhD studies, she had been a teacher and a junior conductor at the Drakensberg Boys Choir.

Her interest in choral traditions led her to the Cape Malay Choirs, and she started attending their competitions to learn more about them.

“It was at a competition in the Good Hope Centre that a colleague of mine from the university pointed to an empty chair and said, ‘that’s where Taliep Petersen used to sit’, Paula recalls. “That plastic chair stayed with me after I went home. Its emptiness spoke very loudly in the packed hall.”

The title of the book is a nod, presumably, to one of the first accolades to come Taliep’s way when he won the crown of Mr Entertainment in 1968 in the hugely popular talent show run by the newspaper, The Post.

Paula’s interest in writing something about Taliep’s life was further piqued when she read The Seed is Mine: The Life of Kas Maine, A South African Sharecropper 1894-1985 by Charles van Onselen and its telling of the story of one man’s life.

“I was astonished at how history can be fashioned on paper (in minute detail!) from very little material traces, and what one can learn about South Africa itself by following one life through the years.”

“So I had started to think – perhaps there was a figure active in the Cape Malay Choirs whose life I could research for a biography. One day just as I awoke, still groggy from sleep, the name ‘Taliep Petersen’ was in my head, as if it had floated up from a bubble in my subconscious and lay there, fully formed, waiting for me to awake.

“I had never met Taliep, never even heard him perform. But I knew that day I wanted to try to write about him. The more I learned about him – the fascinating life he had led, the musical work he had done, his uncompromising work ethic, his important position in the community – the more committed I became to learning even more.”

The cast of Carnival a la District Six which probably was the  forerunner of District Six — The Musical. It included Salie Daniels, Terry Smith, Madeegha Anders and Dave Bestman.

Having fallen in love with biography as a literary genre, she knew that in the life of Taliep Petersen she had found a worthy subject.

“I made contact per letter with Taliep’s father, Mogamat Ladien, and subsequently met with the rest of his family, who gave me their time, their contacts and whatever archival material I needed for my PhD. The rest is history,” Paula says.

After she graduated in 2013, Paula kept on reading, writing and interviewing, casting ever wider, speaking to more and more people who were important to Taliep and his work.

“Of course there were months in the intervening years during which I, of necessity, had to turn my mind to other work, but I never really stopped working on Taliep’s life. His family has been hugely supportive of this project over the past decade, and it was an honour and such a pleasure to finally share the news with them earlier this year that I finished the book and found a publisher for it.

“One of the most challenging things about writing this book, and the reason it took over a decade to write, was that I felt such a great responsibility in telling this story that I kept on feeling I had simply not done enough research. Of course no biography can ever be ‘complete’ – it is impossible to capture the richness of a lived life, especially one that involved as many people as Taliep’s did, in the pages of a single book.

“I soon realised that, besides music of course, it was people – and a great many of them – that played such a vital role in his life. I had to make sure that I was doing my best to capture what was most important, and to include as many key voices as possible. Eventually, I did more than 50 interviews with more than 30 people. And still I know that there are many more people who could have been interviewed had I been able to keep working on this project for another 10 years!

“One may ask if I uncovered any gems that the world did not know about Taliep. I’m sure I have. Just as I am also sure that there are even more gems out there left to uncover, even more details that only the community that surrounded Taliep knows.”

Whilst Paula never had the pleasure of seeing Taliep perform live, thanks to DVD recordings she has managed to see most of his work including District Six – The Musical.

“I was born a year before Taliep and David [Kramer] first began working on it. Writing this book involved me learning a lot about Cape Town’s musical history, but also about South Africa, and in particular, about difficult years in our history that Taliep lived through. What I learned along the way was one of the highlights of this decade-long journey. I’m definitely not the same person I was before embarking on it.”

Taliep was honoured multiple times in the entertainment industry before and after his death. He even has a pedestrian bridge across Eastern Boulevard named after him.

Mr Entertainment – The Life of Taliep Petersen will no doubt be a resource that could lead to further examination of his career and contribution to the social fabric of Cape Town in particular.

This blog has long wanted to do a tribute article on the late singer but that would never cover the expanse of Taliep’s achievements. 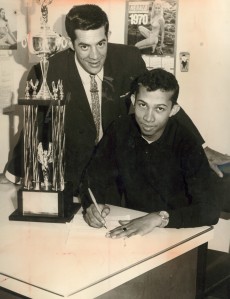 Comic-compere Jerry Hector with Taliep Petersen at a signing back in the late Sixties.

Back in 1967 was when Taliep and I first crossed paths, him as a balladeer on the many, many variety shows that did the rounds in Cape Town and me as a budding cadet reporter on The Post. He did not have much to say then but one always got the sense that he was focussed, and looking and learning.

By 1968 he had honed his skills enough to win the Mr Entertainment title competing against singers a lot more experienced.

He became a much sought after performer for the local promoters but Taliep was already showing vision and foresight. He studied classical guitar, he was involved to some degree in productions like Hair, Godspell and Jesus Christ Superstar and graduated to the more high-profile venues of the neighbouring states to ply his trade.

With his group Sapphyre he became the go-to person to provide the entertainment at the top hotels. It was while he was working up north that he put on, along with Davey Bestman, Carnivale a la District 6. It featured many of the performers he would take with him when he and David Kramer put the smash hit District Six – The Musical on the boards.

One could condense what followed but there still wouldn’t be enough space to list everything – like Kat And The Kings, his TV series, the sitcom Ali Barber and, of course, his passion for the Malay Choirs and specially the Oranjes

Instead we were left to lament a loss of life taken way too early.

Taliep and I had many, many interactions as entertainer and journalist but there are two memories that stand out. The first, very early on in his career, when seasoned local comic Jerry Hector brought him to the newspaper office to make the announcement that he was “signing up” the young Taliep. Taliep hardly said a word.

The second was the last occasion when we actually met. It was in 2005 on one of my visits to Cape Town. In his Athlone home, I asked him the secret of his successful career and his response was: “I have a lot of people working with me in an industry which can be notoriously unreliable. I follow one strict rule: ‘Jy’s reg, of djy’s weg!”

It spoke volumes of the single-mindedness that drove him.

Can’t wait for the book.

The cast of Carnival a la District Six which Taliep Petersen and Dave Bestman put together when they were playing top venues on South Africa’s borders in the Eighties. Taliep is in the back row on the far right.