Billy Brink as Cape Town music lovers will remember him in clubs around Cape Town in the early ’70s. He has just released his first single Shadow On The Waves after more than 50 years in the business.

Billy Brink and his fellow travellers in a ’70s Cape Town group called Food, never reached the popularity heights of other bands of that time because they were . . . well, different. –—

Cape Town’s band scene in the clubs around that time was over-populated with groups that played cover versions of pop songs. A few, like Pacific Express, Oswietie, Little Wing, Big Daddy, played music of a more progressive nature but in the main, cover versions.

The guys in Food, however, dug into their creative bag of tricks and played their own stuff. Billy Brink, then primarily a flautist, was at the forefront when it came to composing stuff.

The group also came up with some interesting formats when they took to the stage – no drummer, multiple flautists, a violinist.

It was interesting. It was different. But were they successful? Not by a long shot. 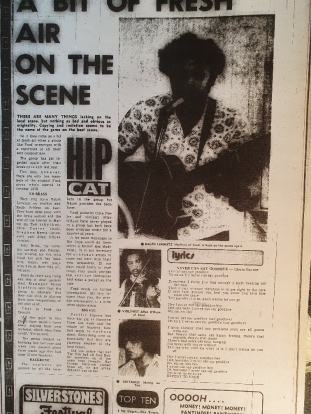 A 1973 newspaper clip from The Cape Herald lauding the high-quality band, Food. Click on the image tp enlarge.

Drummer Noel Kistima, who played around the same time with Billy Brink and Food, summed it up nicely: “They were a band’s band. Other musicians liked to go and listen to them but the general public wanted to hear the popular stuff.”

Randall Bezuidenhout, an accomplished guitarist now living in Australia who also played in that period with groups like Big Daddy and Little Wing, had a similar take on Food: “They were quite innovative in what they produced, but the truth is, they were just too advanced for the likes of Cape Town music lovers.

“It’s a sad fact of music life in Cape Town that if you don’t play what people want, they ain’t gonna come through the door. And if they don’t, you don’t get to put food on the table.”

So, where is all this going? Billy Brink hasn’t graced the local scene since leaving Cape Town more than 30 years ago. Well, as it happens, Billy is making huge “waves” on social media with his first formal recording venture.

He is promoting the recent release of his Shadow On The Waves that is available on Spotify and iTunes for 79c. And, he says it could be the precursor to an album.

A lot of water has flowed under the bridge since Billy flew out to broaden his horizons overseas. He left Cape Town for London where he based himself about 15 years and started a band called On The Brink

As he puts it: “Most of the time in UK was spent gigging around East Anglia and Europe. Towards the end of the 90s I attended Cambridge Regional College to get a diploma in Music Facilitation that led to a job teaching music at Mildenhall Upper School in Suffolk where many of the students’ parents were ‘On the Brink’ fans. That was fun!”

In 2002, Billy and wife Janet headed for the warmer climes of Spain where they started a group, The Brink, which catered for the huge expat British community and setting up his own studio.

It was at his base in Spain that Billy recorded Shadow On The Waves.

Billy and wife Janet . . . a pair in perfect harmony.

“I recorded Shadow On The Waves over a period of a few years between gigs, teaching guitar and making recordings for other musicians. Lock-down of 2020 allowed me the time to finalise it,” he said.

“The inspiration behind the tune was probably a culmination of reminiscences of Cape Town and experiences in Spain. It was a musical idea that had been fermenting in the back of my mind since the days of Food.”

Billy played all the instruments on the song except for the sax and percussion.

“I have several musical ideas I want to explore as well as completing production on several of my other original songs. Hopefully by the end of this year I will have an album compiled.”

That would be music to the ears of many people back in Cape Town who follow Billy’s activities on the Continent.

Billy started in the late ’60s-early ’70s with a group called The Rhythm Set that included the Remmitz boys, Ralph and Anton, and Theo Caeser. He also played with a highly respected unit called Paradox.

It was with Food, though, that Billy made his mark, particularly playing every instrument he could lay his hands on. They delivered but couldn’t make an impact where it mattered at the door.

“I rated Food up there along with Oswietie, Pacific Express, Four Sounds,” Billy says. “However, it is hard to compare, as we were the only band playing original music at the time.

Billy uses a quote by their then manager, Vivienne Stoffels, to drive home his point: “Food was way beyond their time, playing and experimenting with original music – a time when the crowd wanted Blood, Sweat and Tears and Chicago which they could play in a heartbeat if required.”

After Food – and before leaving Cape Town – Billy was part of a duo, Tyrone and Billy, which gigged around the country, and he briefly fronted a group called BlowUp. They were signed to the Richard Jon Smith’s management team with the intention of recording (which would have been his first).

It never happened. The group folded, and Billy, after branching out into theatre as a musical director for shows like Godspell and Alice, for a while, headed for London. Before he left, though, he studied jazz under the tutelage of one of Cape Town’s finest exponents of the genre, Merton Barrow.

In London he met acoustic guitarist Janet and the two formed On The Brink.

Billy had met Janet at Bens Cafe Grill in Claremont where the duo, Tyrone and Billy, played. The duo then moved to Durban on a three-month gig at the infamous ‘ Magoos Bar’. After their contract, Billy returned to Cape Town and he and Janet decided to emigrate to the UK in May 1986 and formed On The Brink.

“The gigs in London gained momentum and before we knew it we were averaging four nights a week and Janet progressed to keyboards and saxophone. And yes, we have very similar tastes in music.”

It was not unusual for some well known names on the London music scene to jam with On The Brink. Dave Greenfield of The Stranglers once joined them on stage for their rendition of Manenberg,

“Paul Weller [of punk band The Jam fame] appeared at a pub in Cambridge and played a couple of songs with us and Geoff Britton, who played with Paul McCartney’s Wings, was our drummer for a couple of years.”

Whilst Billy has Shadow on The Waves as his first foray as a recording artist, online I found three tunes that are attributed to him – Soham, Running and Maak ‘n Skyf.”

Why then has he decided to release something now?

“I had been toying with the idea of doing this for some time. Then lockdown afforded me the time and a lengthy hiatus in gigs gave me the incentive to tackle it. I don’t have any high expectations regarding income but, like the lottery, if you don’t buy a ticket, you can’t win. In the same vein if I don’t publish my songs I’ll never know their appeal.”

Notwithstanding, The Brink Band still has a strong base in an upmarket coastal resort in Spain. Their regular following are the expats but they get a fair few tourists to their gigs playing a mix of covers without lowering their standards.

“I am somehow fortunate not to have fallen into that trap as we play exclusively covers that we personally enjoy. “

Three decades down the track Billy still acknowledges his time learning his craft in Cape Town. “I look back on my time as a muso in Cape Town as a time of great fun and an indelible experience but it’s impossible to imagine what might have happened had I stayed.

“Too many doors were closing in CT when I left and I’ve been fortunate to have found a beautiful area of Spain in which to live which is very much like the Cape. We enjoy the Brink Band Monday jam sessions which I run and I am still enjoying the adventure.”

All material on this  blog is copyrighted. Permission has to be obtained to publish any part thereof.