Heritage month has now come and gone and one of the highlights has to be the Legends Passing The Baton show at Artscape last weekend, featuring local icons Sophia Foster, Sylvia Mdunyelwa, Ebrahim Khalil Shihab, Ian Smith and Terry Fortune.

Legends indeed. There would be at least 250 years of entertainment experience wrapped up in that little group.

In time to come, there is no doubt that the five would feature in the tapestry that would depict Cape Town’s musical heritage.

The show’s director, Basil Appollis, said that while it celebrated the five’s status as legends, it was also about nurturing new talent in the community and giving the up and coming generation a chance to meet and interact with the older performers.

This is no more apparent than the case of pianist Ebrahim Khalil Shihab handing over the baton to young keyboardist Ramon Alexander – he had never met Ebrahim before this show.

This is what he said on his Facebook page beneath a picture of the two at the show’s rehearsal: “Posing here with one of my all-time idols, Mr Ebrahim Khalil Shihab. I’ve always admired and loved this man’s work as a master jazz pianist and composer from a distance, but it wasn’t until today that I met him and shared some music. Grateful for this beyond words.”

This is the second year that the Legends Passing The Baton show has been held and Appollis was delighted with the decision by the Artscape board on the night to make it an annual event.

“Last year we kicked off the show with legends Sophia Foster, Sylvia Mdenyulwa and Ian Smith. This year we added Ebrahim and Terry Fortune,” Appollis said. 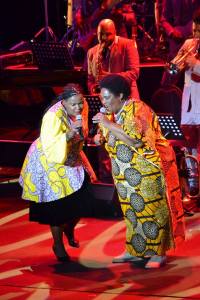 Fancy Galada and Sylvia Mdenyulwa whoop it up on stage.

“Next year we could possible be looking at a new set of legends. There are so many who fall into that category . . . most of them are in their late ’60s. We could also broaden our genre range by including someone like Virginia Davids who is well known in the opera field.

“We did in fact celebrate Ebrahim as a composer and pianist, not necessarily for popular music, although he performed a song called Bo Kaap, which, if recorded, will be a big hit.”

Appollis himself is becoming a bit of a legend in the entertainment industry. He has had great success in the theatre field with the recent shows My Word! Redesigning Buckingham Palace and Cold Case – Revisiting Dulcie September .

Lately he has been in demand as a director for musical shows. Two weeks ago he directed Night of the Stars at Grand West. Is he changing his focus?

“Not really,” he says. “I have always loved music and I’ve always loved drama. So I think the two are just coming together. Ever since I’ve come back to Cape Town, I’ve done musical/theatre kind of events. I Did Rocking Our City a couple of years ago and the Christmas Party for the mayor, switching on the lights.

“These are one-off events and I think my experience of music and drama helps me bring a different element to what is normally a music concert. I bring the drama element to it.”

There certainly were some “dramatic” elements to last week’s show. Appollis had Sophia Foster descending from the heavens onto the stage, Ian Smith “rising” from the orchestra pit and Sylvia Mdenyulwa making her appearance in a hot car.

“It works in the context of musical theatre which I think adds value to it. Otherwise it could be just another variety concert. I also had two grand pianos on stage.

“Also, I love story telling. It is another element which I bring to concerts. Each of legends, apart from the intro of a little story where they come from and who they are, the MC does short little interviews with the legends and this is treated more irreverently.”

Sophia Foster says she is deeply impressed not only with Abigail Bagley but with all the others.

“There’s another generation coming up and it is awe inspiring,” she said. “And I’m just talking about Cape Town, never mind the other places. The real talent is not given enough exposure, not showcased enough to grow.”

Wise words from a legend who just keep on going. She thought a few years ago she was winding back but the work keeps coming in. She is booked out this weekend and then off to Jo’burg next week for another show. All this with no manager, no agent. Abigail Bagley will learn a lot from this lady.

Alex Tabisher probably summed up the feelings of all the recipients when he wrote on his Facebook page: “This weekend was one for the books. On Friday and Saturday, I performed on the Artscape stage. It was such an honour sharing the stage with such legendary and talented artists. I was also pushed out of my comfort zone and I’m so grateful for that. A massive thank you Basil Appollis and Camillo Lombard and the ever fabulous Terry Fortune for the amazing opportunity! I loved every second of it!”