Not Pop Gang is an electronic rap group starting out in Cape Town. They’re young, fresh, keen, ambitious and typical of the new breed of musicians coming through.Now this blog, as one of it’s main objectives, was set up to profile and follow the careers of entertainers who have achieved a certain status on the local scene – “legends” as it were, even if there are those who want to deride the term.

But, on reflection, and since this is my blog and I write what I like (when I like!), I thought, “why limit it to the past, let’s look to the future as well”. Some of these youngsters coming through could well be legends in time to come.

Having spent a few weeks in the shadows of my favourite mountain recently, I was struck by the many opportunities available to the younger generation to equip themselves with formal theory as they embark on music careers. This wasn’t the case with our “legends” who, in the main, were self-taught.

Apart from the great strides being made in schools and universities with musical education, we also have academies such as Camillo Lombard’s Cape Music Institute in Athlone and Soul Candi, the home of house music in South Africa, they claim.

Soul Candi brings me back to Not Pop Gang. It is there that the group is getting its grounding in music but not on the conventional instruments like guitar or piano or saxophone. Their “instrument” of choice is termed a DAW, a digital audio workstation.

The group has been together for 18 months. All have a common love for electronic sounds and rap music. So, as Sponz says, it’s “electronic rap, it’s alternative music, basically everything that’s not pop culture, hence the name Not Pop Gang”. Santon, incidentally, is the son of Robin Santon  who is well known in deejay circles in Cape Town for the last 30-odd years and is now much in demand as an audio-visual technician at big stage shows. Robin learnt his craft as part of the Audio-Visual Creations team led by Tubby Welby-Solomon  back in the ’70s and ’80s.

The five either went to school together where they dabbled in beat box stuff and deejaying or hooked up at Soul Candi where they decided to continue their passion for the love of electronic music and rap.

“We studied music production and music theory and we graduated together. Soul Candi specialised in house music and that’s what they taught because it tied in with their record label,” Santon said. “But you could apply the teaching we received to other genres as well and that’s what we did.

“When they gave us that leeway to do our own thing, I began listening to Max and Pumzy’s beats quite a lot and I was influenced by them. We started composing tunes jointly.

“It must have been alright because other students at Soul Candi started playing our stuff.”

Andrews, who had been singing with the group Forefront, and Buckton teamed up with them and they started doing gigs together but not in any organised fashion.

Not Pop Gang’s first real gig was a signal moment in their short existence. “Our very first engagement was for an organisation called Don’t Mind The Bass or DMTB, as they prefer to be called,” Andrews said.

“They were hosting a party at a venue called the Imperial in Long Street. DMTB approached us and said they had heard some of our stuff even though we weren’t really known in their circles.

“It was a gamble actually. We knocked ’em out, we couldn’t believe it. The guys who were on before us were playing stuff that had the crowd just chillin’. When we came on, we floored them, doing our signature stuff, all own compositions.” 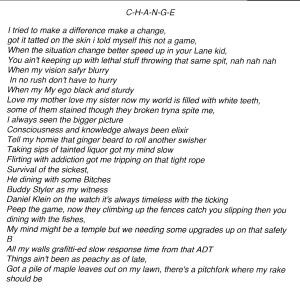 One of Not Pop Gang’s compositions, Change. Click on image to to enlarge.

The group’s stage performance brings that little extra into play instead of the straight deejaying routine.

“We have the bass guitar and Nick doing vocals while one of would be beat boxing. It’s a cool thing to interact with the crowd rather than do a straight set. It adds a bit extra,” Pityana said.

The group says they used the DMTB gig as something of a launching pad to really get it together.

“It took a little time because we were still doing gigs individually but the clincher was the fact that we had this idea of doing an album together,” Pityana says.

Santon continues: “We were in effect three producers at Soul Candi. On any given day, one of us would be producing a song. We’d be sending it to each other via WhatsaApp, each one would listen to it and then there would be a decision whether or not we record.”

The job of writing the lyrics falls to Andrews and Pityana. They say there is no particular writing direction. It can touch on social comment, being quirky, about drugs, or just something cool.

While they’re doing their thing, the other three are sitting at the DAWs (digital audio workstations, remember)

“Each producer, as we call ourselves, can make an entire song from scratch on the computer . . . the drum pattern, the bass line. One would think it’s a band playing, but it is basically me sitting at a computer . . . we work alone, we work together, it’s the modern thing.”

Each producer has his own sound. Santon likes the bass lines. Max is hung up on the all those electronic sounds you get in The Expendables.

“What comes out as a collective is unique,” Santon says.

The group pitches to a 15 -25 age group and if you’re part of that demographic and you haven’t yet heard of Not Pop Gang, you more than likely will in the near future.

They have an EP CD available featuring five of their compositions – New Drugs, Too Easy, E For Effort, Change, and Fast Lane.

It’s not a sound that I’m used to but I have to say, much of it was easy on the ear for someone who is more attuned to a jazz sound.

But . . . digital audio workstation? I’m still trying to get my head around that. It’s electronic rap and it’s the future. Not Pop Gang is the future.

[Their debut EP is available at https://m.soundcloud.com/notpop/sets/not-pop-gang-ep]

Material in this blog is copyrighted. Any reproduction requires permission.