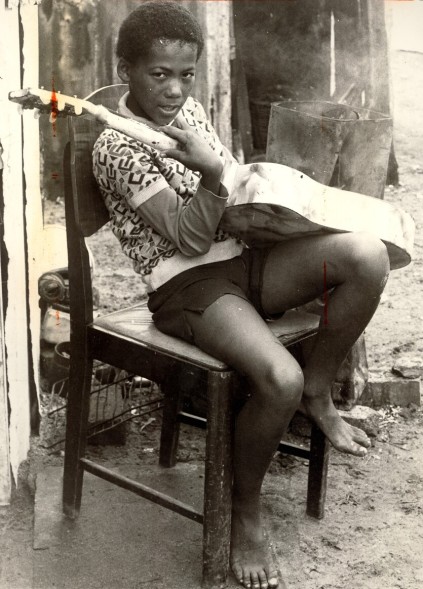 Young Jonathan Butler – Jompas – who showed at tender age he had a talent to play and sing.

Jonathan Butler, the teenybopper sensation of the ’70s in South Africa, left that world behind a long, long time ago. That funky kid with the uber cool moves on stage and a plaintive voice that rivalled Michael Jackson, moved on to bigger – much bigger – and better things.

That teenage sensation now has made a name for himself in the US in the gospel field, playing to huge audiences and with a social media following of hundreds of thousands.

The one-time teen idol is now also a senior citizen – and a grandfather. He turns 60 today. Way to go, “Jompas”!

Jonathan has been out of Cape Town, and South Africa, for decades. He headed for London in 1985, after a hugely successful stage and recording career that gave an adoring fan base first the monster hit Please Stay, and then the highly respected 7th Ave and Crossroads album that stamped him as brilliant guitarist.

He also proved to be a more than competent studio producer for some of the top acts in Cape Town, including jazz pianist Tony Schilder’s debut album.

While Jonathan’s overseas achievements, particularly in the US where he has recorded numerous albums, have received coverage and featured on SA radio stations, it is still his old hits that get constant airtime.

If it’s not Please Stay that get’s requested then its 7th Avenue. The child prodigy and adolescent Jonathan still has a huge place in their hearts.

Now’s as good a time as any to reflect on those early days when a kid named Butler, in shorts, stole the hearts of people who frequented the many stage shows put on around Athlone the late ’60s.

It wasn’t young Jonathan though; it was his brother, Danny, who won the Mr Junior Entertainer major talent contest run by the Cape Post in 1967. And then there was their sister Sandra, who wasn’t a bad singer either.

It was two years later, in June and July of 1969, that then eight-year-old Jonathan got his first mention in the Post when he was named in the list of artists appearing in the big talent contest run by the paper. He won the junior section.

Over the next few years the precocious talent was a regular on the stage shows that proliferated on the Cape Flats at the time. He also had a stint with The Golden City Dixies where his early stagecraft was guided by the likes of Zane Adams, Al Hendricks and Sophia Foster.

Around 1972, he linked up with The Rockets who, by then, had established themselves as the top pop group in the country. That, for many, was the first real step in his climb up the ladder to success.

With vocalist Colin “Bones” Delight alongside him, the pint-sized JB rocked the joint with every performance.

Guitarist Jerry Watt, who still leads The Rockets today, says: “He was an absolute marvel. He could sing the house down; he had all the dance moves. The crowds just loved him.

“The Jackson 5 was the top US group at the time. We tried to emulate them in our stage shows and Jonathan was our answer to Michael Jackson. The kid was awesome.”

Touring the country with The Rockets gave Jonathan the exposure that put him on the radar of local record companies keen to get into an untapped black market.

It was no surprise then that Jo’burg company CCP, run my the Clive Calder and Ralph Simon who managed Richard Jon Smith, signed him up and he was a support act on the hugely successful RJS show which had sell-out crowds throughout the country.

With their management and marketing skills, the company put their clout in the industry behind Jonathan and released his first single, Please Stay in 1975, an emotional entreaty that today, 45 years later, is still one of the most requested songs on Cape Town radio.

It was followed by more hits – I Love How You Love Me and I’ll Be Home – before his maturing musical prowess demanded that he engage with more challenging genres.

This was around the time he started gigging with Pacific Express and fell in line with their jazz-funk style. Express, with musicians like Tony Cedras, Paul Abrahams, Jack Momple and Robbie Jansen in its line-up, exposed Jonathan to music that challenged his capabilities. It allowed him to test himself as a composer and songwriter.

This productive period came when he was signed to Paddy Lee Thorp’s Mountain Records and his artist management company. It was also a time when Jonathan slotted in with the free and easy lifestyle of some of Express’s members. A young JB learnt a lot of things then.

But he soon decided that that lifestyle was not for him he turned to religion and gospel music. He also found love in the form of Baranice Beeton of Port Elizabeth who he married in 1983.

He had a year or so of gospel recordings and gigs, before leaving very suddenly for London and then New York to begin his new career as an international artist.

A pint-sized Jonathan Butler showing off his moves when he fronted The Rockets with “Bones” Delight.

He has come back to SA on a few occasions for some gigs, most notably the Cape Town Jazz International Jazz Festival, but home for him now is the new Mecca of big-time music, Los Angeles where lives with his second wife.

That is the potted version of Jonathan Butler’s early days. Most South African music lovers have a stronger attachment to the teen idol than they do to his new career. That has been the purpose of this blog piece – to reflect on those early days.

Richard Jon Smith said: “Happy 60th birthday Jonathan. You have come a very long way and achieved so many marvellous things. I personally know (as I have witnessed working with you on my tours), just how much love your fans shared with you as you enjoyed entertaining them. You inspired them and, in fact inspired all of us on the shows.

“I don’t know if you remember but YOU recommended me for my first ‘Praise and Worship Leader’ posting in England. Thank so much and may the Almighty God bless you Jonathan. Fondest love, Richard and Glenda.” 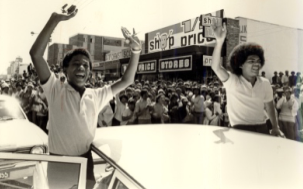 Jonathan Butler and Ronnie Joyce acknowledge the adulation at a public appearance in Elsies River in 1976.

From brother Danny Butler: “Best wishes on your 60th Jompas. That was our nickname for him since childhood. We all had a nickname. He has made us so proud. I remember him on TV in Rhodesia before it TV had even come to South Africa. It was unreal.”

Colin Delight said: Hey, Jompas, have a great day. You deserve everything that comes your way. You were a star then and you’re a star now. I remember one night after a show back in 1973 we went to a house and all the young girls put you on a table and you performed for them for ages. You wouldn’t stop playing and we couldn’t get to the girls!”

Colin was also in awe of the fact that you picked up Jerry’s guitar and played it left-handed.

Jompas was going to have a big 60th birthday in CT. Planning had started earlier this year. But it seems Covid cruelled it.

Let’s all wish our original teenybopper idol a happy 60th.