Sophia Foster, the head of the Foster Foundation, with the all-female cast of Sista’s Tribute To Aretha which will be live streamed next Sunday

Singer Sophia Foster is reprising her Sista’s Tribute To Aretha Show that hit the boards in December last year – with one huge difference. This time she’s going global.

The veteran diva and her Fostering Foundation kids will present the same show next Sunday, September 13, going live in an online streaming event.

Unlike the first outing of the show that was put on at the Nassau school in Newlands where only 220 people could attend, Sophia is banking on a much bigger audience, courtesy of modern technology and the reach of the internet.

“My broer,” she says in her trademark opening line, “I’m hoping that the response is huge. We’re counting on thousands and thousands buying tickets. It’s for a very good cause.”

The original Sista’s Tribute To Aretha Show was Sophia’s acknowledgment of the role the Queen of Soul played in her formative years. 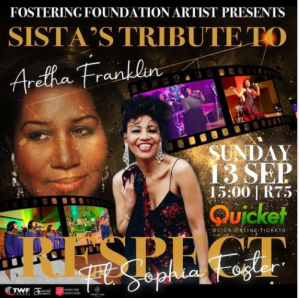 Sophia used the first performance to showcase the talents of the young artists she mentors as part of Fostering Foundation that she set up to nurture raw talent.

“We put on a wonderful first performance last December and followed it up with a couple of corporate gigs but Covid 19 kinda brought things to a halt,” she said. “There were so many people who were dying to see the show but we went into lockdown.

“However, we can’t stagnate indefinitely. Now technology gives us this great opportunity to not only put on this show again for a few hundred people but to take it out of a suburb in Cape Town and present it to the rest of the city, the rest of South Africa, and to the world.

“We’re all pretty excited about that. We know how much people overseas hanker after something from home. Now ex-pats in Australia and New Zealand can watch it next Sunday night, South Africans in Canada and America can watch it early on the Sunday morning and in the UK they can watch it with us on a Sunday afternoon.

“And if they can’t watch it live, it will be available for delayed streaming for about 10 days after that. Everybody’s a winner!”

Tickets for the show can be obtained at www.quicket.co.za and costs R75. [That’s about $5 in Oz and NZ, about $4 in North America and cheap-cheap in the UK.]

The show will be aired from Aki Khan’s Penny Lane Studios in Wynberg.

It will once again feature an all-female cast made up of the young performers but this time there will be one big change – Sophia herself will be joining them on stage.

“Performing at Penny Lane Studios will be like coming home,” Sophia said. “The studio is close to where I grew up as a child.”

The recent easing of the lockdown restrictions has meant the students and Sophia can get in a number of days of rehearsals to fine-tune the presentation.

As can be expected, Sophia will make full use of the extravagant wardrobe she wore on stage when she was much in demand on the hotel circuit in Southern Africa.

Sophia also has the expertise of experienced dancer Tilly Daniels Barber to polish the choreography of the young cast.

Unlike previous shows taped at Penny Lane Studios where performers played to a room filled with camera and lighting crew, Sophia has used the tricks she has learnt over the years to turn the studio in a mini-theatre accommodating about 20 people.

“It will help the young ones who could find performing to an empty room a bit daunting.”

Sista’s Tribute For Aretha cast going through their paces for next Sunday’s show which will be live-streamed.

The Lady Is A Vamp