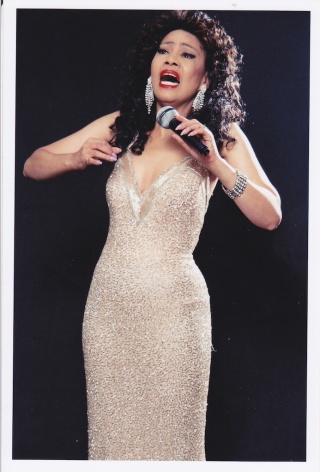 For Cape Town songbird Sophia Foster, soul queen Aretha Franklin was a major part of the soundtrack of her life. She grew up with Aretha’s songs, she identified with the sentiments and she included many in her repertoire.

Sophia is no different from most who grew up in the Sixties listening to all the legendary soul singers – Otis Redding, Sam and Dave, Wilson Pickett, Sam Cooke, Percy Sledge, Oscar Toney Jnr.

Aretha’s passing last week hit home with Sophia, so much so that she says she feels compelled to honour the singer. She is planning to put together an “Aretha tribute” show to honour and celebrate her life.

“I am already planning it in my head and have spoken to a female pianist who accompanies me on my shows,” Sophia said at the weekend.

The focus, she says, will be on female entertainers, who no doubt will channel Aretha’s clarion call in songs like RESPECT, Young Gifted And Black, Try A Little Tenderness and Change is Gonna Come.

“I am busy scouting the females, as my angle here will be putting together the vintage and the current female singers,” Sophia said.

Sophia’s career started around 1967 when she joined the Golden City Dixies Variety Show as a dancer but quickly showed a talent for singing as well.

“Off course, I always had Aretha’s songs in my repertoire back then as most of her lyrics resonated with me at the time and remained evergreen . . . songs like Natural Woman. Respect. Young Gifted and Black, which is the song my Foundation kids open our show with.”

The foundation she refers too is her Fostering Foundation she founded last year to nurture young, raw talent in Cape Town.

Sophia first became aware of Aretha when she heard her singing A Change Is Gonna Come 50 years ago.

“It was at the height of apartheid. I cried and cried listening to her lyrics and thinking; ‘will there ever be a change in our country’?

“The same year, RESPECT came out and I learnt the lyrics of these two songs and performed it at a club in Soweto. I kept lifting the arm of the long-player needle to catch up writing the lyrics in long hand.

“Then in 1968, there was People Get Ready and I waited in anticipation thinking the revolution was coming.

“Aretha’s style was unique in the sense that you heard the truth from the get go. That’s what became, like, my mantra – to sing with honesty first..”

Her favourite Aretha song is A House Is Not a Home. “I cry when I sing it.”

Much has been written locally and internationally about the impact of the song RESPECT. It became something of a battle cry for black oppressed and for women. It was first a hit for Otis Redding but Aretha took it to another level.

Its significance wasn’t lost on Sophia back then already: “Back then there was nobody to tell you what you were worth and a regime that made you feel you did not fit in, degrading you at every turn, no hotels, sleeping on a bus, on stage, washing in a hand basin, no hot water, and even in a cowshed .

“And all we wanted was respect and dignity.

“I’d like Aretha’s story of hardship and suffering to serve as a classic example of how we can overcome adversity. She can be a role model for the youngsters in my Fostering Foundation by teaching them the meaning of Respect and the price we artists had to pay back in the day.”

Sophia says she already has the RESPECT show mapped out in her head. “I’ve got in mind to open with something potent, and then weaving her life story through dialogue in between.”

Any show highlighting Aretha’s contribution to our lives would be like revisiting some of those heady times of 1967-68 when the soul fever hit Cape Town.

Who can forget hanging around Jay Jay’s record bar at Athlone Station listening to this exciting new sound blaring from inside. It was a “cool” time, things were “uptight and outtasight”.

If you were old enough, you could catch, “live”, some of the hit songs at Jay Jay’s nightclub, The Soul Workshop, around the corner. Bands like The Chayn Gang, Wild Thing, The Cheyennes and Respect belted out those song with as much fervour as the US stars. I have an idea Respect chose that name as a tribute to that great song.

Aretha will be buried later this week but there will no doubt be a major event in the US at a later stage.

I look forward to Sophia Foster and her Fostering Foundation presenting their effort on stage.

Sophia Foster — The Lady is a Vamp

Diva Foster does exactly what that last name means

All material on this blog is copyrighted.  Permission should be obtained before publishing any part of it.