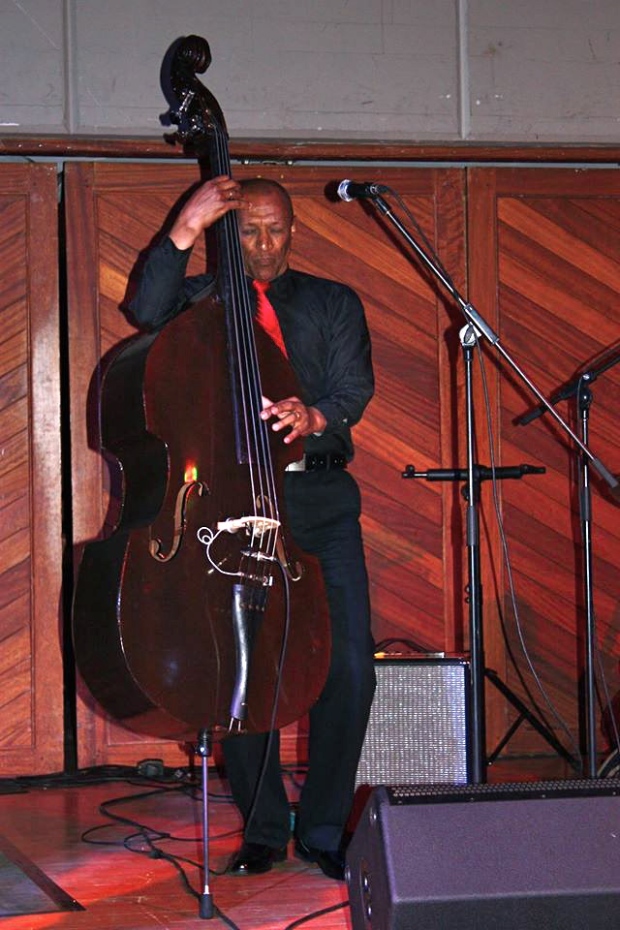 Bassist Lionel Beukes . . . back in Cape Town after playing for the past 10 years in China. With Camillo Lombard, Tich Jean Pierre and Denver Furness, he has reformed the 1992 group Out Of Town. Photo courtesy:

Veteran bassist Lionel Beukes is back in town after 10 years of playing top venues in China. Yep, happily back home. But ask him what he is up to and his first response is — out of town.

So what is it to be: back in town or out of town. Well, both.

He is back in Cape Town and he is back with the band he was playing with back in 1992. That band was called Out of Town.

“It was a nice, tight little group with Camillo Lombard on keyboards, Denver Furness on drums, Tich Jean Pierre on guitar and myself on bass,” Lionel said this week.

“We were around for a couple of years and then we went our separate ways.”

“I ended up playing overseas for 15 years, mainly in China for the past 10 years. But I’m home now and looking to catch up with some of the guys I played with long ago and follow through on a few projects I have been kicking over in my head while I was in China.”

Lionel is 65 years old now and, having started back in the mid-Sixties, he would have played with a few of the leading lights.

He began playing with the Missiles in Athlone with musicians like Charlie Anyster and Llewellyn Roman and they were quite popular. As was with the case with most of the musicians in those days, Lionel had gigs with quite a few groups most notably with the Cape Flats cult band, Oswietie.

“It was all too brief but what a band,” he recalled. “We had class in that group . . . Russell Herman, Mervyn Africa, Robbie Jansen, Kader Khan, Nazir Kapdi . . . all of them were outstanding talents on their instruments.

“And that name. People kept asking us what the name of the group was and we didn’t have one. All we could say was ‘ons wietie’. That became Oswietie, and it stuck.”

Lionel and Out of Town has been featuring at the Lansdowne Club, Swingers, on Sunday nights for the past few weeks and it looks like it will become a permanent gig.

Will he stay in Cape Town?

“It depends. I’m hoping to get stuck into the projects that I have in mind. One of them is teeing up with Ebrahim Khalil Shihab (Chris Schilder) to do a concert of his original stuff and I’d like to do a recording of my own compositions which I penned while I was in China.”

Out of Town has taken advantage of the end of the run of the show Remembering the Lux to get singer Leslie Kleinsmith to front the group on Sunday, January 24.

It might well lead to more gigs for Leslie before he leaves for his new home in France at the end of March. After the Lux show run at The Baxter, Leslie has already scored a gig on the jazz boat cruise up the West Coast and the Tietiesbaai jazz gig. He also has Sunday brunch gigs at The Winchester in Sea Point.

Back in the day . . . Lionel Beukes, left, with Nazir Kapdi on drums, Robbie Jansen on flute and Mervyn Africa on keyboards, playing for Oswietie.