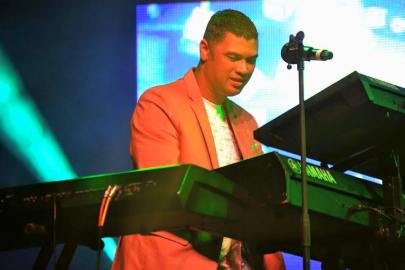 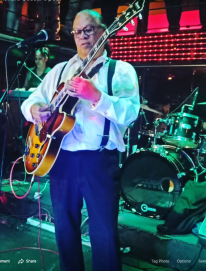 Blog Editor’s Note:  This article was written and posted  before the developments that have enveloped one of the people featured prominently in it.  The show has since been cancelled. This blog is a firm believer in the rule of  law  and allowing courts to decide the matter rather than taking any action that prejudges the issue. The article will remain on the blog until further notice but no comments  will be allowed.]

It goes out next Saturday, August 1, and Top Dog is hoping that with Richard as the main act, the event will have huge appeal to expat South Africans living in Australia and New Zealand.

“Richard enjoys a huge following in both countries because he has performed there over the years and maybe this will be something nice for his fans in distant parts,” Camillo said.

Top Dog had its first online gig in May as musicians moved to the online platform to make up for the money they would have earned with live gigs.

“Our gigs have been few and far between and we have had very little support from the national government in this regard,” Camillo said.

“We have to do what we can. Like everyone else, we have to put food on the table. This is our way of doing it.” 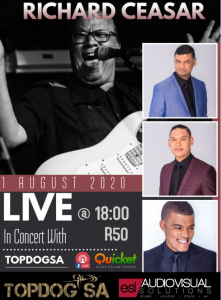 Camillo said the group knew they had to come up with something different as a follow up to their first gig.

“We thought long and hard about which artists to feature. Richard is well loved by many audiences in Cape Town and around the world. He was a perfect fit.”

“We’ll use the occasion to celebrate a Cape Town legend.”

Camillo said viewers of the show would be treated to a “repertoire of contemporary jazz, toe-tapping music seasoned with great improvisation”. It will include some of Richard’s originals and “an amazing song penned by our own Ebrahim Khalil Shihab (Chris Schilder)”.

For Richard, life today is a quite different scenario to what he was doing in July last year. Then he was performing on a cruise ship in the Mediterranean stopping off at ports in Greece, Italy, Spain, France . . . living the dream. 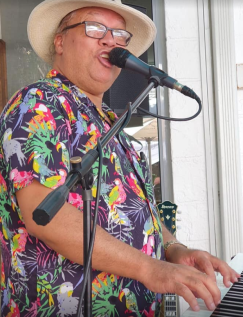 Richard Ceasar . . . from cruising in the Mediterranean to online gig.

The online gig comes at a time when he has to find ways to promote his newest album, The Cape Town Old School Jam, that he released a few weeks ago. It is available now on online platforms like Spotify, Deezer and iTunes. Richard says it is a mixed bag of old favourites that people like to request when he plays.

“It is probably the last time I will be doing something like that. I have reached the stage in my life when I want to do my own stuff to explore my own creativity,” he said.

The online gig will also feature local singer Candice Thornton who is a graduate of the Cape Music Institute and is fast making a name for herself on the local scene. She has released two singles, Superhero and Four Leaf Clover. Top Dog engages her when they need a lead singer.

Tickets for the event can be obtained via Quicket and, here’s the rub . . . it will cost only R50. Camillo says price that is appropriate for a cash-trapped local audience but for the expats, it is a drop in the ocean. R50 equates to less than $5 in Australia, New Zealand and Canada and little more than two British pounds.

“We appeal to our international audiences to purchase as many tickets as they can afford to support our initiatives during Covid 19,” Camillo said.

They are hoping that overseas viewers will buy multiple tickets per household as a gesture. 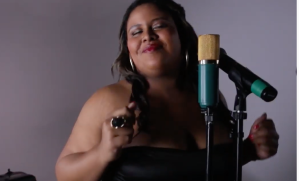 Don’t hold back you expat music lovers in Oz, Kiwiland and in the Northern Hemisphere. Dig deep and buy up big. It’s the least you can do.